By: Tony Bettack of WTMJ

Wisconsin representatives from both sides of the aisle are weighing in on the president's remarks during his State of the Union address.

Republican Congressman Jim Sensenbrenner said the last two years were filled with many successes, and that they must charge ahead.

"Just over a month ago, Congress and the President found a way to come together and pass historic, bipartisan criminal justice reform—the culmination of an effort I was proud to lead for over a decade.

Together, we must build upon that success and choose to push forward through partisan gridlock, reject unprincipled resistance, and restore civility and cooperation. 2/ 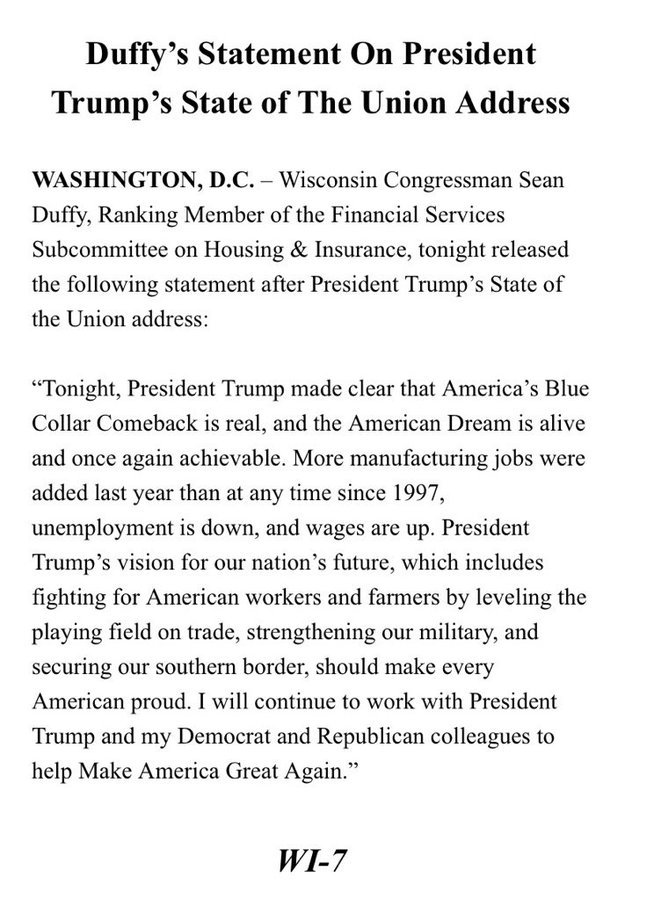 My statement on @realDonaldTrump's #SOTU

Both representatives applauded the president's remarks on border security.

Rep. Sensenbrenner on #SOTU: “It’s imperative that Congress provide the much needed resources to secure our borders, cut off the flow of drugs and illegal immigration, and ensure the safety of the American people. 1/

Experts agree that physical barriers, coupled with other technology-supported solutions, work and are needed. 2/

No Member of Congress is pushing for open borders.

That is a fact. #SOTU

30 people are talking about this

Overall, the Democratic representatives were not impressed with the president's vision for the country.

Let's get out of Yemen. Congress must reassert its constitutional duty on matters of war and peace and get the U.S. out of this senseless conflict. #SOTU

25 people are talking about this