by Jonathan Miller of CQ

In the early months of 2017, a good deal of attention was paid to members of Congress who seemed to be skipping out on town halls for fear of mobs of angry constituents. 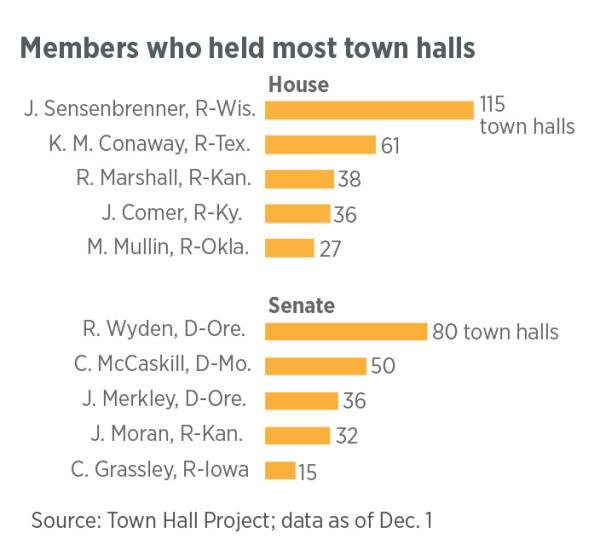 Around that time, the Town Hall Project was born. It evolved from a Google spreadsheet to a searchable online database that allows anyone to find a town hall near them. Some paid staffers and up to 120 volunteers keep it up to date.

Now, the founders of the effort are awarding two members of Congress with an MVP for constituent interface: Rep. Jim Sensenbrenner, a Wisconsin Republican, and Sen. Ron Wyden, an Oregon Democrat. Both well outpaced their colleagues in meeting with the people. Wyden held 80 town halls, Sensenbrenner a whopping 115. Nathan Williams, the co-founder of the Town Hall Project, notes that Wyden makes a point to schedule town halls off his natural turf. “He holds them in all counties in the state, even in ones that aren’t especially Democratic,” he says. Wyden was presented his award at a town hall on Dec. 2.

As for Sensenbrenner, Williams says he is trying to arrange a time to present the award but hasn’t heard back from staff yet. “There’s a lot going on in Congress right now, so we’re not taking it personally that he hasn’t gotten back to us,” he says. The Top 5 town hallers for both the Senate and House can be found in the chart.